Crowded on the Camino

Today’s walk was supposed to be mostly down hill but there were a number of ascents that were fairly difficult.  But I am in the mountains so I guess that’s to be expected.  There is a big pilgrim statue and a lone cross that were notable and of course beautiful mountains – too many pictures to show. 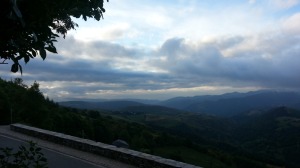 Again I passed through several small villages and the path got a little crowded, not with pilgrims but with farm animals.  It’s not at all unusual to see someone and a dog herding 10 to 20 cows through the main street of town.  We pilgrims need to clear the way and watch where you step!

I made my way from O’Cebreiro to Triacastela.  The early morning was dominated by fog but later in the day the sun came out though the temperatures just made it to 60 degrees.  According to my guide book, I only have 83 miles to go in six more walking days.  According to my FitBit, I’ve now taken 884,985 steps!  Yikes!

3 Responses to Crowded on the Camino