Today started out like most.  I left Villafranco at about 7:45 to begin my 18 mile trek to O’Cebreiro.  The first 13 miles were along a beautiful river on one side and a road on the other.  The traffic, if you can call it that, was very light – maybe a car every four minutes.  The sounds were dominated by the river waters working their way through the rocks.  I went through a half dozen or so small villages and stopped at one for coffee at about 10:00.  A little later, I came across a small chapel, not much bigger than a single car garage, that caught my eye by the way it seemed so well cared for among other buildings that were in need of some attention.  I noticed a back pack and trekking poles laying on a wall outside and was curious to take a look.  The chapel was simple but beautiful.  On a little table I noticed the stamp for my credential so I took off my pack to reach my credential and apply the stamp.  The owner of the back pack and poles was sitting in the thrid pew, left side.  He groaned a little as he got up.  I asked if he was doing OK and he assured me he was.  As we talked I recalled the image of Clarence, the angle in “It’s a Wonderful Life”.  He had a very gentle way about him.  He had a small booklet of reflections that his wife had put together for the Camino.  He was kind enough to share with me a few of his favorites.  The first one he showed me resonated with me and I read it a few times hoping to remember it.  We then wished each other well as he doned his back pack and I head out.  After I had gone just a couple hundred yards or so I realized that I couldn’t remenber the reflection I liked so I turned around and went back.   The gentleman had just finished adjusting his pack when I asked if I could take a picture of the page he had shared.  Below is that picture.  Click on it to make it bigger.  I sure hope you can read the words! 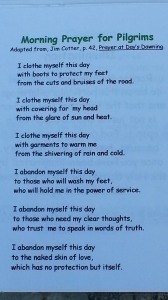 The mountain scenery could not have been more picturesque – a lady proudly attending to her courtyard, a stream cutting through a grassy field among the trees, sheep headed somewhere important to at least one of them. 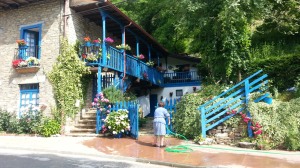 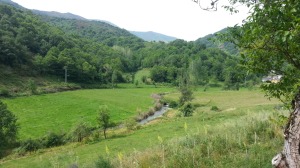 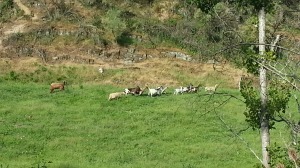 By about 12:30 with lunch in me and 13 miles behind me, I started a rather cardio testing ascent from Herrerias to O’Cebreiro.  The distance is only about 5 miles but the climb is at seven to nine percent incline.  It turns out that some choose to take advantage of an enterprising person who offers horse back rides to the top.  I didn’t take a horse so it took me two and a half hours to make this distance.  The vistas were inspiring but I was also mindful that I had just walked that far. 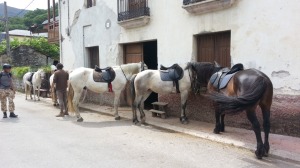 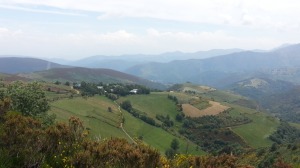 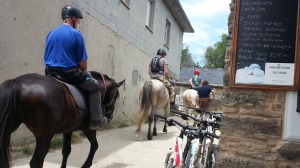 At the top of the mountain, I entered Galicia and left Castilla y Leon behind. Galicia is the Western most province of Spain and is the province of Santiago.  I am now less than 100 miles to Santiago.  You can begin to feel the excitement and anticipation as pilgrims calculate just when each will arrive, when they will first see the Cathedral, will we get to see the Botafumeiro, will some continue on to Finisterre.  Oh, and I met the gentleman from the chapel again.  His name is Bob and we had dinner together.  He and his wife had walked the Camino several times before but this was his last day this time.  He wanted to end this pilgrimage in O’Cebreiro with his wife.  At sunrise, at the little church in O’Cebreito at the top of the mountains in Galicia, he was going to spread her ashes.  His wife of 42 years had died of cancer a few months ago. 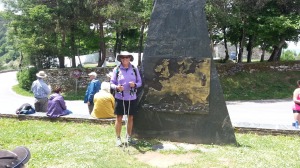 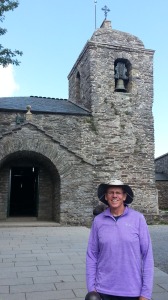 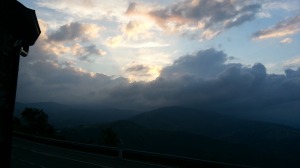