First, I hope everyone is celebrating the freedoms we have that were earned by the many Americans who gave so much.  Happy Memorial Day America!

I also want to report the sad news that a 66 year old American Pilgrim died on the Camino on Thursday on the way from Saint Jean to Roncesvalles just past Orisson. He died of an apparent heart attack.  May he rest in peace.  I’m sure he was welcomed into heaven given the place he passed.  That climb is 8.3% for 7 ½ miles. I’ve heard pilgrims with whom I’m walking say that it was their most difficult day ever.

Yesterday, Sunday was my walk from San Juan to Burgos.  San Juan is a town of 20 residents and Burgos is the capital of Castilla Y Leon with a population of 180,000. Below are pictures of the two big churches in each town.  Which is which is obvious.  The walk out of San Juan a nice tree lined path but then there was a really tough hill for maybe a mile or so but I was rewarded with a beautiful monument – a simple cross held by a pile of rocks.  You can see from the picture that the morning walk was yet another one of cool temperatures and rain.

The approach into Burgos was less than inspiring.  Mostly commercial/industrial areas and the Camino was mostly just sidewalks.  But I did find myself being blessed with some wonderful conversations.  I won’t go into the details but suffice it to say that I got a glimpse of the face of Jesus in a few people and I hope they saw just a little of Jusus in me.  It felt humbling to have people reveal their pain and their hopes as they search for answers on the Camino.

Monday, today, is a day for rest for me.  It is nice to sleep in and stroll the city of Burgos rather than knowing that my walking needs to get me another 15 miles down ther road.  Plaza Mayor is where things happen and where you are likely to run into other pilgrims you’ve met along the way.  Burgos has some beautiful boulivards where people rush by if they are on their way to work or stroll or rest if they have the time.  The highlight of the city is the Cathedral Burgos or Santa Maria.  I’ve included a few pictures but unless you see it in person, the pictures don’t do it justice.  It is a Gothic cathedral and one of the largest in Spain.  I think that it is the oldest cathedral in the Iberian pennsula.  It was started in the eleven hundreds and repalced an earlier Roman church build on the same site.  It’s old!  I also took a picture of snails sold at a little market.  it should be a movie because you could have seen them crawling around.

So tomorrow my role as tourest ends and my role as pilgrim resumes.  I will be entering the Meseta where there are fewer towns and facilities.  Internet access may be a problem over the next several days so if you don’t hear from me you know why.  The walk should be fairly flat and I’ve been told rather boring, a.k.a., a time for reflection!  Right now the forecast is for some sun and wind but with temperatures in the 50’s and maybe make it to 60.  Not bad.

As always, keep me in your prayers and know that you are in mine. 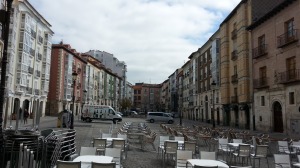 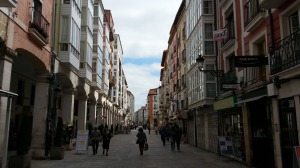 5 Responses to Walk then Rest