My rest/tourist day is over and the Camino resumes.  Before I left Burgos I went to 7:30 PM Mass last night at the Cathedral.  It turns out that the Mass was in English which was a nice change.  It was held in a small side chapel that is off the main entrance.  But small is a relative term.  I got a picture just as mass was ending so you will see what I mean. 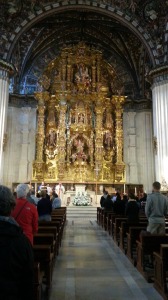 The Camino leaves Burgos through several neighborhoods and then through a tree-lined path that ends with a gate.  If you saw the movie “The Way” I am sure you will recognize the setting for the scene where Martin Sheen gets his backpack handed to him by the boy who took it in Burgos – all under the watchful eye of the boy’s father. 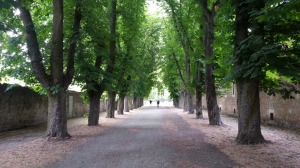 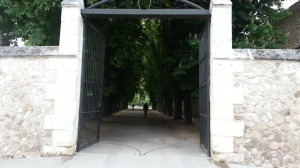 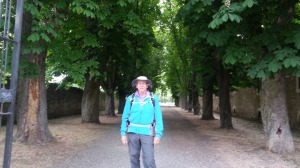 Soon after leaving the hustle and bustle of crowed Burgos, I crossed a small creek and I knew that I was about to enter a different kind of place.  I went through a few small towns and after a little road construction, the path took me to the area known as the Meseta.  In the Meseta, the population is much more sparce and the towns less frequent.  A town of over 500 is a bit rare.  Some pictures below should give you the idea.  My destination today was Hornillos del Camino (Population: 60). There is an Albergue with 32 beds for 5 Euros each and a grocery store.  And a church of course!  Fortunately, I have a reservation at a B&B (6 rooms total) in a nearby town called Isar which is about 2 or 3 km off the Camino.  The nice woman at the Albergue, who spoke English very well, called the owner of my B&B, Miquel, who promptly picked me up and drove me to my accomidations.  Tomorrow Miguel will return me to the Camino to resume my walk. 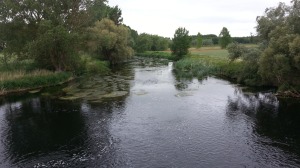 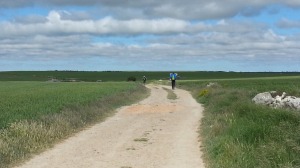 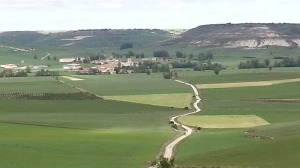 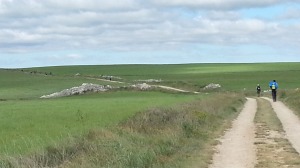 In addition to the terrain and environment transitioning from the city and pavement to the simple path and simple landscape, I met a nice guy who is transitioning like me.  He retired a year ago, not exactly by his choice according to him, and is trying to accept a different type of daily life.  He is just a few years younger than me and we had a great conversation about what retirement means and some adjustments that we need to make.  After a few miles together, he shook my hand and we thanked each other for the conversation.  He stopped for a while and I moved along.  A little later I got to thinking about reconceptualizing who I am and my roles as husband, father, provider, brother, friend, etc.  Maybe the next few days in the Meseta will give me some answers, or maybe just better questions. I’ll see.

Have a blessed day and if internet access continues, look for another post tomorrow though the pictures may not change much.